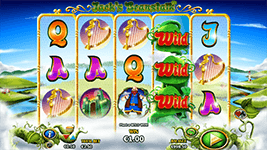 Fee–fi–fo–fum, I smell winnings and a whole lot of fun in your future!  In Jack’s Beanstalk you’ll be climbing to wins in the standard 5-reel video slot layout and and across 25-paylines. The minimum wager is 0.25 credits per spin so the slot is suited to all players.

Up Wild – Just as magical as the fairytale Jack and the Beanstalk, Jack’s Beanstalk slot machine has some fantastical features that you’ll enjoy immensely.  The first feature is the Up Wild, and when a Magic Bean symbol lands on reels 2, 3 or 4, you’ll win three free games. If any further Magic beans land on the other reels then further free spins are granted on top of the original three.

Wild Beanstalk – During the free spins the reel which had the Magic bean symbol trigger will turn into a Wild Beanstalk, starting at the bottom of the reel and during the 3 free spins, the beanstalk will grow until it covers the entire reel on the last free spin. This feature is commonly known as an expanding wild but the difference is that the stalk will only grow on place at a time giving you three re-spins instead of a full Expanding Wild with a single re-spin.

Landing additional Magic Beans on the other reels reset the free spins counter to 3  and also trigger the Wild Beanstalk feature on that reel as well. Note once the Beanstalk reaches the top of the reel on the next spin it will disappear.

Golden Egg Pick Me Bonus – Lastly, Jack’s Beanstalk features a pick me feature called Golden Egg. To trigger this bonus feature you must land 3 Golden Egg symbols anywhere on the reels. You’ll then proceed to pick 3 of the 5 Geese presented to you to reveal cash prizes. The largest hidden prize can be up to an amazing 2500x your bet! Golden Eggs can be found on reels 2, 3 and 4 only and do not appear during the Wild beanstalk feature. 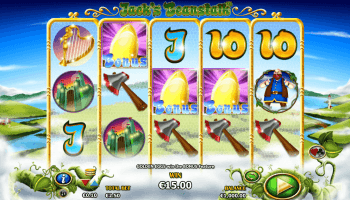 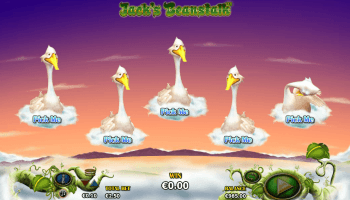 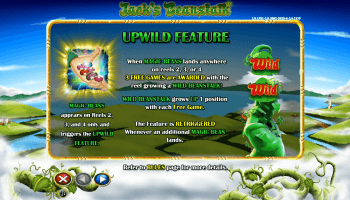