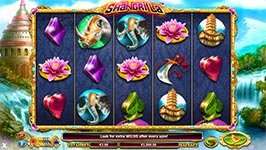 Take a trip to beautiful Shangri La, a 5-reel 15-payline slot by NextGen Gaming that will bring you to the most tranquil region of the planet.  Shangri La has become synonymous with paradise on earth; a place where you can separate yourself from the troubles in the outside world.  We guarantee that when you take a few spins on this slot, only fun and winning will be on your mind!

This gorgeous game is set in a picturesque Asian landscape with beautiful temples and softly sweeping waterfalls in the background. The music is a soothing Asian sound that ignites when you start hitting your wins.  On the reels you’ll be making combinations from elephants, white tigers, armour clad rhinos, swords, lotus flowers and much more. In addition to the top notch graphics and sounds, the game features are plentiful and could net you some big winnings.

Girl Wilds – The Girl symbol is wild and substitutes for all symbols except the scatter to complete winning combinations when possible. One or more Girls substituting in a win doubles the prize with a 2x multiplier! You can find this symbol on reels 2, 3 and 4. Additionally during any spin, there is a chance that additional wilds will be added to the reels.

Added Scatter Feature – During any spin there is a chance additional Scatters will be added to the reels.

Wheel Feature – When you land three or more scatter symbols anywhere on the reels in a spin you will trigger the wheel feature. Spin the wheel to win either free games, super free games, a chest bonus or the trail bonus!

Free Games – 8 Free Games are won with the free game feature. During the Free games special Wild Features are more likely to occur. The free games feature can be re-triggered.