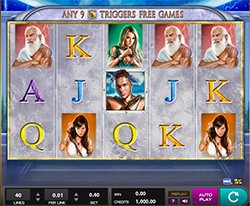 Delve into Greek mythology with The Mighty Atlas slot machine, and learn more about the Titan that held up the sky while you escape with unheard of prize winnings. The slot comes with 5 reels and 40 paylines and numerous features from IGT including scatters, wilds, stacked symbols and free spins.

There were twelve Titans in total, the children of Uranus and Gaea. One of the children was Hyperion who is featured in another of our most recent slot releases.  This game however is about Atlas and he is depicted as strong and handsome figure, as he should be if he carried the weight of the earth on his shoulders! The slot is set against a godly looking backdrop while the reels are adorned with strong and beautiful Titans who look to be Atlas himself, Cronus, Theia and Phoebe. Other symbols include the Earth Gold Medallion, the game logo and card symbols from 10 through Ace.

Mighty Atlas Logo Wilds – The games logo is the wild and will substitute in the Free Games for all other symbols except for the Titan characters and the Golden Earth Medallion.

Capture Feature – During the Free Games, the Capture feature is activated. You’ll see a box in the center position on reel 3 and landing one of the two Titan girls or Cronus in there will build their credit value on the meter at the top. Each symbol can climb in value up to 13 times per meter! Meter values are 2 to 1000 credits times the total bet in the triggering game.