You are now playing »
0 / 2028
The Final Countdown Toggle Lights 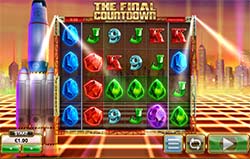 10, 9, 8, 7… Are you ready for blast off? Get ready to see your wins fly out of this world with The Final Countdown slot machine from Big Time Gaming! This exciting new release is set upon a 6-reel and 4-row slot machine with some fantastic bonus features. Win one of 2 free spins bonus round, each featuring their own wild feature. The Roaming Wild grows on each re-trigger up to x256 while the Velocity Wild occurs on a Reel Clone and grows up to x888!

Reel Clone Feature – During each spin there is a chance that a Reel Clone will produce between two and four identical reels between reels 2 and 5. Scatters can also be clones.

Scatter Feature – three or more scatters awards a game feature. The stake used to trigger the feature will be used for the Feature duration. Select either the Countdown Free Spins or the Heading for Venus Free Spins.

The Countdown Free Spins – In this round you’ll be awarded 8 free spins. Countdown scatter pays the same as regular scatters and reduces the countdown by up to 3. The countdown starts at 10 and when it reaches 0 the feature re-triggers.

Heading for Venus Free Spins – In this round you’ll be awarded 15 free spins. A reel clone occurs on every spin. 3 or more scatters re-trigger the feature.