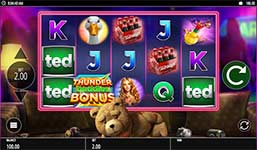 John Bennett, a man whose childhood wish of bringing his teddy bear to life came true, now must decide between keeping the relationship with the bear or his girlfriend, Lori. This foul-mouthed Seth McFarlane creation is back and brought to life by Blueprint Gaming in a 20-line Ted slot machine! Strike huge combinations on the reels with a bevy of features while Ted swears and farts all the way through. Get ready for a rip-roaring good time on the reels with Ted!

This licensed game is based on the smash 2012 hit movie featuring Mark Wahlberg, Mila Kunis and Seth McFarlane. The movie surprised many by becoming a box office smash and this slot certainly does it justice. The humour is adult in nature and features the voice of Ted throughout with popular phrases from the film. You’ll be inside Ted’s living room with beer cans and marijuana pillows scattered on the couch while Ted sleeps among them.  Occasionally Ted will wake up and get high on his bong while awarding one the game’s many bonus features. This is one of the most entertaining and adult slots we’ve ever played and if you’re a fan of McFarlane, you’re going to love it too. As Ted proclaims when the game loads, “Someone’s going to get lucky!” and it could be you!

In the base game there are six randomly triggered bonus features which are awarded if Ted wakes up from the couch.  These include the Laser Gun Wilds, Beer Streak feature, Psychedelic Super Spins, Psychedelic Colossal Spins, TV Remove Symbol Streak feature and Psychedelic Bonus Boost Feature.

Laser Gun Wilds – Ted jumps up from the couch and fires a Laser Gun at the reels. A laser bean bounces around the screen turning symbols it hits wild.

Beer Streak Feature – once you get a winning combination, Ted jumps up and sprays beer over the reels covering them in frothy bubbles. The symbols then shuffle into a new winning combination – this can occur a number of times until the bubbles pop.

Psychedelic Super Spins – Ted awakens from his sleep, picks up a hookah pip and immerses the reels in smoke. A number of special Ted symbols are added to the reels which transform into the same symbol and rewards you with a cluster of line wins.

Psychedelic Colossal Spins – Ted awakes from his nap, picks up his hookah pipe and covers the reels in smoke. Once the smoke is gone, 3 of the reels combine to give you 1 colossal reel which guarantees you a colossal symbol winning combination.

TV Remote Symbol Streak Feature – Once the reels have stopped symbol and you’ve got a win, Ted jumps up and bashes the TV remote’s buttons. The reels then re-spin with the winning symbols held in position. This continues until the win cannot be improved.

Psychedelic Bonus Boost Feature – Ted picks up a bong and submerges the reels in smoke which adds a number of bonus symbols to the reels. This greatly increases your chances of landing the Thunder Buddies Bonus feature.