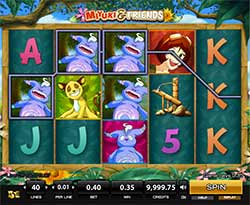 Join Miyuki & Friends in an ultra-fun journey through 40-lines of Anime and Manga animation, in this animated free slot machine! This slot’s graphics were inspired by Hayao Miyazaki, a Japanese film director, producer, screenwriter, animator, author and manga artist. He has been so influential in Japan that h has been called the Japanese equivalent of Walt Disney, Steven Spielberg and Orsen Welles.

In this game, Miyuki and her Friends are trekking through the woods when they become separated and it is your job to help them find each other. On the reels you’ll find Miyuki, a green lantern, a red lantern, the Miyuki & Friends Logo, her yellow animal friend, the purple animal friend, a water spout, and traditional letter symbols.

Play slots for real money at Slots.LV and get $22 Free. All players welcome!

Multiplier Feature – Miyuki, her friends, the red lantern and the water spout symbols in all positions on 3 or more consecutive reels and in a winning combination awards a multiplier of 2x, 3x or 5x. All wins containing the symbol that initiated the feature are multiplied by the awarded multiplier for that spin. The game’s wild symbol cannot substitute for these symbols to initiate the feature.

Miyuki & Friends Wild Logo – The game’s logo is the Wild and will substitute for all symbols except the airplane symbol.
Choose your bet size and number of line to play and then Spin to Win!