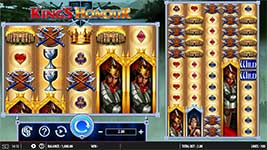 Get ready for an epic battle on the reels to defend the Kingdom from invasion in the 100-line King’s Honor slot by Barcrest! Spin across 10 total lines on two reel sets as you wage battle in this game. There are a total of 12 incredible bonus features in this game, some of which are listed below. Watch as wilds transfer from the standard reels to the Colossal Reels for additional wins, and earn mystery wins in the King’s Charge Bonus.

Wild Symbol – The Wild symbol substitutes for all others in the game except the Bonus and Colossal Reels Bonus symbols.

King’s Charge Bonus – The King’s Charge Bonus is a mystery bonus that can trigger during any spin. This bonus selects a random symbol and forces instances for these on to the reels to create a win. The selected symbols can be oversized, covering multiple positions horizontally.

Bonus Symbols – The sword in the stone is the bonus symbol and only appears on reels 1, 3 and 5 of the standard and Colossal reels. 3, 4, 5 and 6 in view will trigger the Reel of Honour. 2 symbols in view may trigger the Siege Spin Bonus.

Reel of Honour – Spin the Reel of Honour to determine whether a number of Free Spins or one of the Pot Multiplier Bonus values is awarded. Free Spins use the same award card as the base game spin that triggered the feature.