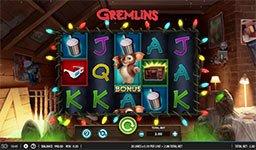 “Don’t expose him to bright light. Don’t ever get him wet. And don’t ever, ever feed him after midnight.” This sage advice is ignored midway through Gremlins, with devastating results. Join the cute, fuzzy little “Mogwai” from the hit 1984 comedy/horror film across 20-lines in this incredible new online slot from Red 7 and WMS.  Gizmo and Stripe grace the reels and can award an enormous array of bonus features that can add to your bankroll. There are three different free spins rounds, a Gizmo Box Hunt, and No More Cash After Midnight bonus feature. But for heaven’s sake, whatever you do, do not feed the mogwai after midnight!

Stripe Wild Symbol – Stripe, leader of the Gremlins horde, is the game’s wild symbol.  The WILD symbol appears on all reels and substitutes for all symbols except scatter symbols. During the base game, there is a chance for WILD symbols to multiply and replace random symbols on the reels at the end of a spin.

Freebie Bonus – During the base game, if one or two BONUS symbols land, there is a chance for the BONUS symbol(s) to multiply and trigger the BONUS SELECTOR.

Gremlin Link Free Spins – The Gremlin Link Free Spins feature starts with 3 lives. A life is lost on any spin that does not land a STRIPE symbol. Any spin that lands a STRIPE symbol will restore the number of lives back to a total of 3 lives. Any STRIPE symbol which lands on the reels will remain on the reel set until the end of the feature. Each STRIPE symbol contains a cash value which will be awarded at the end of the feature. There is a 6th reel set in this feature which contains GIZMO MULTIPLIER symbols. When a GIZMO MULTIPLIER symbol lands, it will multiply all active cash values by the multiplier shown on the symbol. Available multipliers are 2x, 3x and 5x. The feature will play until all 3 lives have been lost and will pay out the total of the cash value symbols. There are no win lines available in this feature.

Avoid the Sun Free Spins – Unlimited Free Spins are awarded for this feature. The TOTAL SPINS meter starts on 1 and will increase with each spin. When 8 winning spins are achieved, Persisting Wilds will be activated.

11 SUNS END FREE SPINS Free Spins will end when a total of 11 or more SUN symbols land on the reels over the duration of the feature or the maximum win is achieved. The total number of SUN symbols which have appeared over the duration of the feature are shown about the reel set. The number of winning spins is also shown here. During Free Spins, the bet and paylines are the same as the spin that triggered the feature The BONUS symbol does not appear in this feature.

Gizmo Box Hunt – In this feature there are 4 levels and 9 boxes to choose from, per level. Boxes can contain Cash Values, “Level up”, or “Collect”. This feature contains 4 levels. Find a “Level Up” to go to the next level and choose from a new set of boxes. Any winnings won so far will be retained, and awarded at the end of the feature. Higher levels contain boxes with larger Cash Values. Boxes can be selected until a “Collect” is found. The amount won in the feature is the total of all the Cash Values found.