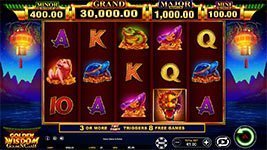 Harvest the knowledge of ancient Chinese elders in Golden Wisdom Golden Cash slot machine by Ainsworth Gaming.  Spin across 5 reels with 25 pay lines and try your luck at winning one of four jackpot prizes.  This gorgeous game also offers bonuses like Wilds, Free Spins and the Golden Cash Feature!

Dragon Wild Symbol – The Dragon substitutes for all symbols in the game except scatters to complete wins. Wilds can appear on reels 2, 3, 4 and 5.

Free Games Bonus – The Golden Peach is the free spins scatter trigger and can appear on reels 2, 3 and 4. Landing 6 or more Golden Peach symbols wins all Golden Prizes appearing on the Golden Peach. The Dragon Wild has a 2x Multiplier applied to all wins it is involved in.

Bonus Jackpots – Any 3, 4 or 5 bonus symbols will award the Mini Bonus, Minor Bonus, or Major Bonus respectively. The Grand Prize is awarded when 15 Golden Peach are collected during the Golden Cash Feature or the Extra Bonus Golden Cash Feature.