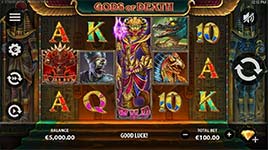 Spin ancient reels in the presence of the ominous Gods of Death in this exciting 10-line slots game from Stakelogic. But don’t be afraid – these gods can randomly conjure up tornado’s to change the reels to your advantage. You should also be on the lookout for Snake Queens; they are wild and expand when they land on the third reel, and descend slowly to enhance your chances of big winnings. Digging up three golden mummies will unlock the gates to the treasure-filled inner sanctum of the Egyptian Gods. Reel-covering mummies that are wild will rise from their tombs and stride across the Free Spinning reels to help create winning combinations. Gods of Death also introduces the Super Stake Feature: it gives you another shot after a non-winning spin with more symbols of the same kind! So enter the old tombs and discover ancient treasures in Gods of Death!

Snake Queen Wild Reel – When a Snake Queen symbol lands on reel 3 it expands to cover the entire reel, making it a wild reel. After every winning spin, the snake queen symbol automatically drops down one position until it leaves the reel.

Tornado Feature – This feature can trigger after every non-winning spin. When the Tornado Feature is active, one of the reels is picked and one or more of the other reels transform into a copy of that reel. the tornado feature can only trigger in the base game.

Super Stake Feature – Double your bet to activate a special Super Stake mode for extra chances of hitting insanely valuable winning combinations. The average hit frequency for this feature is once every 43 spins and includes the chance for bigger sized wins.

Mummy Wild Reel – When a mummy symbol lands on the reels during free spins, it expands to cover the entire reel, making it a Wild Reel. After every spin, the Mummy symbol moves left one reel on each subsequent free spin until it leaves the game. Mummy Symbols are on reels one to five and substitute for all symbols except the Pharaoh Scatters.