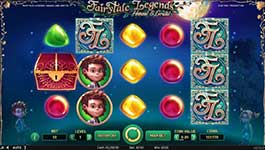 Follow the breadcrumb trail to big winnings in the new Fairytale Legends: Hansel and Gretel slot by NetEnt! There are many treasures to be found in the enchanted forest and to find them you’ll need to spin the 5-reels and 10-lines of this slot. Evade the evil witch who will try to lure you into her Candy House and you could walk away with winnings that will make your fairytale come true!

This gorgeous new game is the second in the Fairytale Legends series by NetEnt, the first being Red Riding Hood. This slot is based on the famous German story Hansel & Gretel from the Brothers Grimm around 1812 and takes place deep in the forest. It’s a rather horrific tale that tells of a young brother and sister who are kidnapped by a cannibalistic witch that wants to eat them. Evade capture from the sinister witch and make off with her candies and riches in this incredible new release. While the game has just 10-lines, there are great bonus features like Stacked Wild Re-Spins to help you earn big wins.

Random Features – The three random features in this game are the Fairy Wonder Spin, Fairy Surprise and Fairy Wild Spin. Random Features can be activated at any time during the main game.

Fairy Wonder Spin – In this random feature, a cluster of 5 to 9 game logo symbols appear as an overlay on the reels for one spin.

Fairy Surprise – The Fairy Surprise Random Feature is activated randomly in case of a no-win situation in the main game. A symbol is randomly selected from the symbols on the reels after the spin. Other symbols, starting from the low win symbols, will turn into the selected symbol until a win is awarded.

Fairy Wild Spin – In this feature, 2 full stacks of Wild symbols can randomly appear on reels 1, 2, 4 and 5 during the spin. After the reels stop and the wins have been paid, a Stacked Wild Re-Spin is awarded.

Bonus Features – Three treasure chest symbols appearing on reels 1, 3 and 5 in the main game activate one of the Bonus Features.  The three bonus features include Candy House Bonus, Free Spins and Coin Win.

<< The Lost Riches of the Amazons
Lucky Easter >>