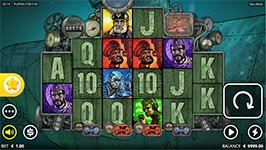 Perishing in the harsh sea’s depths lies the lost WWII gold, hidden in a longed after submarine. The fight for gold is at an all time high, where the hunters can become the prey very easily. Chaos erupts as your u-boat is in danger of suffering grief damages. Will you be able to evade the enemy’s ferocious attacks and bring back the gold? Or will you suffer the nature of the cruel war at sea?  Find out in Das xBoot free slots game created by NoLimit City!

xNudge Wilds – 4-row high Wild that always nudges into fully visible, where every nudge increases the Wild multiplier with +1.

xWays – Special symbol that adds additional winning ways, as it will always reveal 2-3 of the same symbol. Land several xWays symbols and they’ll all be of the same kind.

xBomb Wild Multiplier – xBombs will blow away the non-winning symbols from the reel, to make room for new symbols to fall in, as well as it’s counted as a Wild. A xBomb also increases the win multiplier by one before the next collapse.

Silent Hunter Spins – Three bonus symbols activates eight Silent Hunter Spins where reel 3 has grown to 8 rows high. Get ready to enter the torpedo launch sequence when you land a winning combination together with the Periscope Wild on reel 3. Hit the target and the Periscope Wild fills the third reel to the top and nudges down to the bottom, giving a win multiplier for each nudge downwards. It will also award an increased win multiplier for the remainder of the feature. xBombs also award a sticky win multiplier for the remainder of the feature.

Das Gold Des Roter Teufel – Max payout of the game is set to 55.200x times the base bet. Trigger this, and the game round will end.

NoLimit Bonus – Feature Buy – Buy your way straight into one of the different bonus features, ranging from 75x to 350x the base bet.