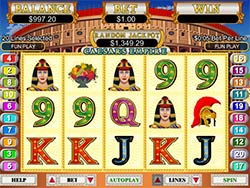 Celebrate the Roman triumphs with the Emperor that ruled a thousand lands in Caesar’s Empire slot machine by RTG!  This game has 5-reels and 20-lines while carrying you through the conquering of lands at the height of the Roman Empire. Get your share of the spoils in one of the most popular games ever developed by Real Time Gaming, complete with wild symbols, scatters, and free spins!

This video slot is as classic as they come.  You’ll be thrust back to the Roman period where the empire stretched across the continent.  While the Romans were conquering lands they were also claiming treasures that you can get your share of.  The game is set in front of the famous Colosseum in Rome, Italy. On the reels you’ll find a Roman soldiers helmet, Caesar himself, Cleopatra, a gold coin, a shield and sword, basket of fruit and card symbols 9 through ace.  With a classic theme, classic slots feel and great features, Caesar’s Empire is sure to be in your regular line up of slots to play.

Wilds – The golden coin of Caesar is the game’s wild symbols and appears on reels 1 through 4 during normal games.  It will substitute for all other symbols except the scattered Colosseum symbol.  When the Caesar coin appears in a winning combination, the prize is tripled!

Colosseum Scatters – Landing two or more Colosseum symbols anywhere on the reels to win anywhere from 1x to 100x your bet instantly!

Free Games – The free game feature is triggered when 1 or more Caesars appear on the reels and the Colosseum appears on reel 5.  You will then win 10 free games during which all prizes are doubled and Caesar may also appear on reel 5. All Colosseum symbols are changed to Caesars or Cleopatras during free games and every Caesar that appears awards up to five extra free games!