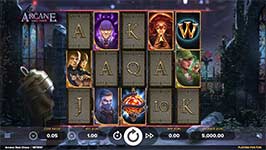 In Arcane Reel Chaos slot from NetEnt, you’ll go up against a villain named Deep Pockets who is terrorizing an entire city. The game is set within a dystopian futuristic world and is steeped in the occult. It’s time to join forces with four other heroes and fight back to save the city from reel chaos!

Arcane Reel Chaos is a 5-reel, 3-row, 20-line video slot in which four heroes protect their city from the evil Deep Pockets. The four heroes – Flare, Chronos, Zero.x and Psyop – each bring their own unique super power to the reels to grant Stacked Wilds, Multipliers, Multiplying Re-Spins and Overlay Wilds! The big showdown in Free Spins is really something. Every time Deep Pocket’s is defeated by a hero, a bet line multiplier increases, giving up to 4 times the bet line win. If all heroes defeat Deep Pockets, a sweet Victory Bonus is awarded.

Wild Symbol – The regular wild symbols can appear on any reel in the main game and in the Chrono Re-spins and substitute for all symbols except for scatters. Wild symbol substitution pays the highest possible winning combination on a bet line.

Psyop’s Stacked Wilds – The feature is randomly activated in the main game. When Psyop appears during a spin, 3 stacked wild overlays are created that cover an entire reel. Stacked Wilds appear on 2 or 3 reels during the feature.

Zero.X’s Overlay Wilds – The feature is randomly activated in the main game. When Zero.x appears on the reels during a spin, 3 to 5 random Overlay Wild symbols are created.

Flare’s Multiplier – When Flare appears during a spin, the multiplier increases bet line wins by x3, x4 or x5. The feature is randomly activated in the main game when a bet line win occurs.

Free Spins Bonus – Land three scatter symbols anywhere on reels 1, 3 and 5 in the main game to activate free spins. In Free Spins, the heroes fight the enemy, Deep Pockets, in up to 4 different stages. If the hero passes the final stage, an additional bonus win is awarded.