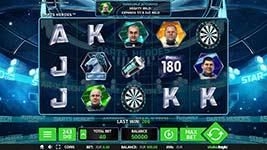 Ladies and gentleman are you ready? Aim for the triple 20 a let’s play Darts Heroes! Witness the intergalactic darts finale featuring real life darts legends Raymond van Barneveld, Michael van Gerwen, Gary Anderson and Phil Taylor! Each of these darts legends represents a unique WILD Feature that will maximize your wins. Spin the reels of this futuristic slot to watch your favorite players unleash their alter-ego superheroes – and use their superpowers to your advantage! Aim for the stars with the new game Darts Heroes and win up to 26,730 coins per spin!

Stake Logic has been creating some of the most entertaining slots of the last few years and this game is no exception. Just like in their Football Gladiators slot that featured Andrea Pirlo, Tony Kroos and others, this game introduces real Darts legends. Instead of being thrust into the Colosseum of ancient Rome, these athletes are in outer space competing for the title. The introduction to the game introduces each of the darts players by name and alias, like Phil “The Power” Taylor.  He’s in touch competition against Gary “The Flying Scotsman” Anderson, Michael “Mighty Mike” van Gerwen and Raymond “Barney” van Barneveld.

243 Ways to Win – This game is packed with 243 possible winning combinations instead of standard line wins.

Free Spins – Each of the four darts players in the game has his own designated Bonus Symbol and Wild Symbol. When three matching bonus symbols for one of the players lands scattered on reels 1, 3 and 5 you will win 20 free spins. You will be transferred to a special set of reels that feature player specific bonus features.