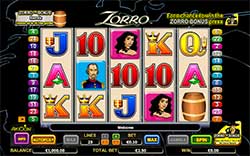 The enigmatic Zorro (or as some have dubbed him the masked ranger) comes alive in the new 25-line Zorro slot machine from Aristocrat slots. Zorro has become quite a popular figure since his creation in 1919 by writer Johnston McCulley.  Since then there have been numerous Hollywood films made about the character including The Mask of Zorro and the Legend of Zorro.  None of those titles however come close to offering rewards and entertainment like the Aristocrat slot machine!

One of the greatest parts of the Zorro slot game are the many features that add extra winning opportunities.  You’ll find about a plethora of different bonus rounds where you can win either instant cash prizes or free spins. To earn the chance of getting the bonuses, you’ll have to spin the letters Z, O, R, R and O on the reels. The Zorro figure on the yellow background must be pressed to activate the Bonus feature and if you get them, one of the bonuses will be selected for you at random.

Zorro Gold Coins Match – Select Coins until 2 matching prizes have been revealed. Prize will be up to (500x bet per line) on the game that started the Zorro Bonus feature as shown on screen. You win that prize multiplied by any revealed multipliers which range from x2, x3, x4, x5 and x10!

Zorro Bonus Barrels – With the Barrel bonus feature you’ll get to choose between 5 and 20 free spins with multipliers ranging from x2 to x15 on your wins!

Zorro Bonus Wild Z – Hit three bonus wild symbols marked by the big Z and you’ll win yourself 3 Free Spins. During each free game a ‘Z’ will be placed randomly on the screen in one symbol position. Each Z symbol remains in the same symbol position until free games have been completed. Z substitutes for all symbols except the Scattered Horse.

Zorro Bonus Magic Door – You’ll be presented with a few doors from which you’ll have to choose one. Behind the doors you’ll reveal your mystery character who could be Zorro, Juliana or Monastario. 5 Free Games will be awarded when that character appears during the game, select it to reveal a prize.  You’ll win up to 1000x, 750x or 500x bet per line) on the game that started the ZORRO bonus feature for each of the characters respectively.