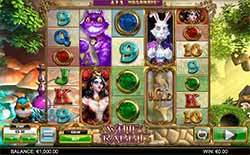 “Oh dear! Oh Dear! I shall be late!” Don’t wait another minute before spinning the reels of the new White Rabbit slot machine from Big Time Gaming. This thrilling new game is based on the famous rabbit character from Lewis Carroll’s Alice’s Adventures in Wonderland story and takes you on an enchanting voyage for riches.

The graphics in this game are fantastic and mesmerizing while featuring some of the fables most endearing characters. You can land combinations that include the Queen of Hearts, Cheshire Cat, Alice and the White Rabbit. The Mad Hatter, Caterillar or the Tweedles may also show up to help bestow riches upon you. There is so much good in this game that we can’t speak about just the graphics. The bonus features make this game one of our favourites of the year. Big Time have introduced the new Extending Reels feature that enlarges the play field to offer up to an amazing 248,832 Megaways to win.

Alice Wilds – Alice is the wild symbol and can appear on reels 2-5. This symbol can substitute for all other symbols except the scatter, cupcake and feature drop symbols.

Free Spins Scatter – The Rabbit is the scatter symbol and appears on reels 2, 3 and 4 only. If you have three scatter symbols anywhere on those reels you will trigger the feature which awards 15 free spins.

Extending Reels – The new Extending Reels feature from Big Time Gaming allows extra symbols to be added during a feature game play scenario that increase the ways to win.

Caterpillar Bonus Wilds – Randomly during the base game the Caterpillar adds up to 4 Bonus Wild symbols to the screen. The bonus wild symbols increase all involved combinations by 2 or 3 and substitute for all other symbols except the scatter and Feature Drop symbols.

Cupcake Mystery Symbols – Every time a Cupcake lands, the Cupcake symbol is replaced by two new symbols and the number of symbols in that reel increases by one. The reels can extend up to a maximum 12 symbols per reel.

Feature Re-Trigger – When a reel reaches the maximum of 12 symbols, the feature is re-triggered.

Queen’s Reel – When a reel reaches the maximum of 12 symbols the Queen’s reel is used which is an enhanced reel with extra Red Queens and Wilds.

<< Legend of the Pharaohs
Serengeti Lions >>