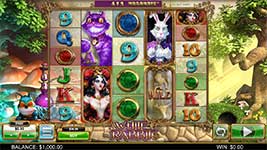 Explore a magical world with Alice as your guide in the incredible White Rabbit Megaways slot online from Big Time Gaming!  This game features up to 7 Symbols High and up to 248,832 ways to win during Extended Reels feature with the Megaways mechanic.  Watch as bonus features like Stacked Wilds, Scatter Pays, Free Spins Feature, Caterpillar Bonus Wilds, Feature Drop Symbols, Extending Reels, Cupcake Symbol Feature, and Queen’s Reel can strike at any minute, leading to big wins! The white rabbit is ready to guide you to riches, all you need to do is spin!

Wild Symbol – Wild symbols can appear on reels 2, 3, 4 and 5 and substitute for all other symbols except the scatter, cupcake and feature drop symbols.

Free Spins Scatter – The Scatter symbol appears on reels 2, 3 and 4 only. Land three scatter to trigger the feature and win 15 free spins. The free games will start with between 5 and 7 symbols per reel.

Cupcake Feature – The Cupcake symbol triggers the Extending Reels feature. Every time a Cupcake lands, the Cupcake symbol is replaced by two new symbols and the number of symbols in that reel increase by one to a maximum of 12 per reel.

Queen’s Reel Feature – When a reel reaches the maximum of 12 symbols the Queen’s reel is used which is an enhanced reel with extra Red Queens and Wilds.

Choose your bet size and spin to win!

Choose your bet size and spin to win!