You are now playing »
0 / 2964
Warlords: Crystals of Power Toggle Lights 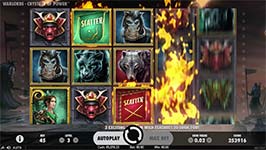 Get closer to conquering the world in Warlords: Crystals of Power, the latest game by NetEnt! The story takes place in a time where rulers went out of their way to conquer land and riches. After years of war and pillaging only three rulers remain: The Barbarian, The Priestess and The Samurai. They are now left to defeat each other, capturing everything for themselves. Choose a side and help to earn your rewards!

Warlords: Crystals of Power is a 5-reel video slot with 30-lines featuring Wild substitutions, Stacked symbols, Scatter symbols, Re-Spins, Free Spins and Random Features. In Warlords you get 3 times the excitement with 3 different Free Spins each corresponding to one of the 3 different types of Scatter symbols: The Barbarian, The Priestess and The Samurai. Getting different Scatter symbols activates the Scatter battle between the three warlords, and the game begins.

So which Warlord are you? The Barbarian, The Priestess or the Samurai? The RTP of this game is 96.89%

Jewelled Wilds – The symbol with three jewels is the wild and will substitute for all symbols except the scatters to complete wins.