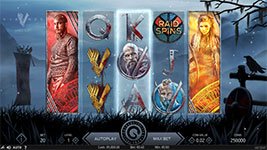 Inspired by the blockbuster HBO television show and featuring the programs biggest stars comes the new Vikings slot machine from NetEnt! Join forces with a famous Norse clan from the dark ages of Scandinavia as they invade England and France for silver and gold. This exciting game is set atop a 5-reel 243 ways layout in normal mode that expands to 7-reels and 78,125 ways to win in Raid Spins. There are plenty of opportunities to plunder fortunes in Vikings!

Scatter Pays – When a fully stacked Viking symbol lands completely in the Hotspot, Scatter Pays is activated. After the characters have transformed into the same Viking symbol, the win is evaluated in accordance with a payout scheme available in the paytable.

Shield Wall Feature – In both the main game and in Raid Spins, the Shield Wall appears as a cluster of mystery symbols that appear on random areas of the reels. Once they have appeared, all wins are evaluated.