Get ready to fly into battle alongside Maverick and Goose in one of the most anticipated games of the year, the new Top Gun slot online with 243-ways from Playtech!  This game is completely surreal! One of the biggest names in gaming has teamed up with Paramount Pictures to bring Top Gun back to life.  This comes on the 30th anniversary of the original film’s release and on the heels of the announcement that a sequel to the film is currently being written.

The graphics and soundtrack will certainly ‘take your breath away’, to quote one of the most memorable tracks in the movie which also makes an appearance in this slot. The game features original footage from the 1986 film as well as music from this classic adventure.  Being an officially licensed slot, you’ll bare witness to exclusive movie footage during bonus rounds and certain icon hits and hear the crackle of the radio as game commentary belts out.  You’ll also see the familiar faces from the movie like Goose played by Anthony Edwards, Jester, Iceman, Stinger and more. Lt. Pete ‘Maverick’ Mitchell played by Tom Cruise doesn’t make an appearance but that is likely a legal image rights issue that the companies and Cruise couldn’t get over.  None the less, the game is superb and the most cinematic slot we’ve ever come across!

Danger Zone Free Spins – Welcome to the Danger Zone! This is one of the more fantastic features of the slot and to activate free spins you’ll need to get three Jet symbols on reels 1, 3 and 5 simultaneously. Once activated you will earn 8 free spins during which the F-14 will fly onto the screen to award Dog Fight Wilds to increase your winning possibilities!

243 Ways to Win – With 243 ways to win  you eliminate the requirement for set numbers of paylines. Matching icons simply need to fall adjacent to each other on the reels to form winning combinations which means your game play and winning combinations have just opened up to a whole new world of opportunity.

Dog Fight Wilds – Once you activate the Dog Fight Wilds, the F-14 Tomcat fighter jet will fly onto the screen, lock, load and fire missiles onto the reels unleashing a barrage of Top Gun win symbols! You can get up to 15 Dog Fight Wilds in this game 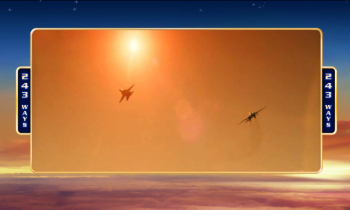 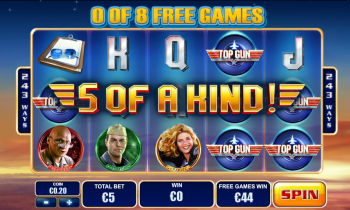 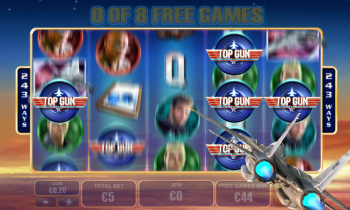 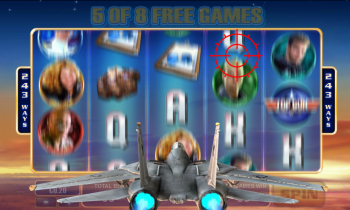 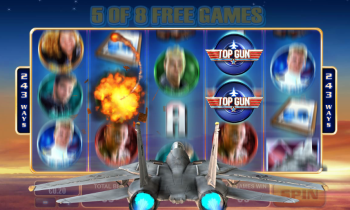 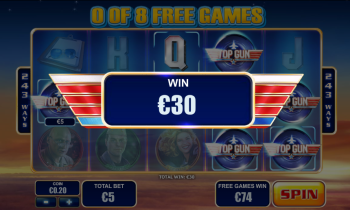