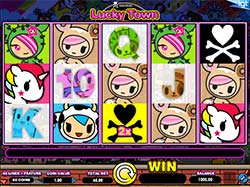 Enter the incredible world of Tokidoki, originally created in 2005 as a Japanese-inspired lifestyle brand and now as a fun 5-reel video slot with 40-paylines. It’s Tokidoki Lucky Town, and the welcome wagon has just rolled in with your basket of goodies!

When it comes to licensed slots there isn’t anyone in the business that does it better than IGT. Just take a look at last year’s Family Guy slot for example.  In this game you’ll be brought into the creations of Italian artist Simone Legno and into the colourful and wacky world of the Tokidoki.  Spend time with the Cactus Friends, Moofia, Unicorno, Punk Star, Donutella and more on the reels as you spin to win!  The biggest feature of this game is the Revealed Reels that have different characteristics for each reel.  Read more about the features below.

Wilds – The Tokidoki logo is the wild symbol in the game and substitutes for all other symbols except the 2x Scatter symbol to complete winning combinations when possible.

Revealed Reels #4-5 – Revealed Reel #4 let’s you pick a carton to win instant rewards.  Your prize can be anywhere from 1x to 10x your total bet. Revealed Reel #5 has Character wild symbols that trigger the Symbol Upgrade feature and turns all matching character symbols Wild!