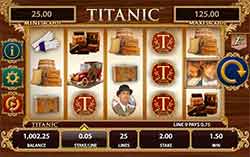 The epic, action-packed romance set against the ill-fated maiden voyage of the R.M.S. Titanic is brought back to life in the 5-reel, 25-payline Titanic slot machine by Bally! This fantastic game is based on the hit 1997 film from James Cameron and one of the highest grossing films of all time. Even Oscar winning actor Leonardo DiCaprio and Kate Winslet make appearances in this game!

This brilliant game features all of the start from the Titanic film that grossed over 2 billion dollars USD in the box office.  You’ll see Leonardo DiCaprio’s character Jack Dawson on the reels along with Kate Winslet’s character of Rose DeWitt Bukater.  Cal Hockley and Ruth DeWitt Bukater also appear in the slot along with vintage suitcases, antique stopwatches, ships cargo and many more valuable symbols.  The real star of the show however are the many and varied features that can have you booking your ship ticket in first class!

Jackpot Scatter Pays –  Land two or more JackRose, JackRose Wild or JackRose Double Wild appearing in any position on the reels and you can anywhere from 2x your stake all the way up to a seismic 500x your total bet!

Wheel Feature – Getting 3 scattered ship, ship wild, ship double wild symbols on reels 1, 3 and 5 starts the Wheel Feature.  To begin, click on the wheel to spin it where you can win either coins immediately or free spins.  In this feature you will win between 60x and 200x your total stake per line!