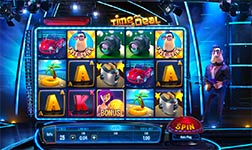 Time for a Deal Slot

Time for a Deal

Come on down and be the next contestant on Time for a Deal slot machine from Ash Gaming! This exciting game puts you in the middle of the action with 5-reels and 25-paylines with lots of opportunities to hit big bonus features. This 3D cinematic slot let’s you get into the action on a game show that includes the possibility to win many exciting features with grand prizes hiding behind different doors!

From the moment the game loads, you know you’re in it to win it. The music playing in the background is a seductive kind of 70’s game show tune while the host named Roger stands on the right side of the slot, giving you instructions and cheering all the way through. His speech is gargled so don’t expect to understand everything he says, except luckily speech bubbles are provided.  On the reels you’ll see all sort of of prizes that you can win, some big and some small, just like in The Price is Right show featuring Drew Carey.  You can see prizes as small as a toaster or as large as a vacation and new car.

Time for a Deal Features

Time for a Deal Wilds – The game’s logo is the wild symbol and substitutes for all symbols except the Bonus and Free Spin scatters to complete winning combinations when possible.

Big Deal Bonus – The beautiful hosts assistant holding the gold coin is the Big Deal Bonus trigger symbol. Land these scatters on reels 1, 3 and 5 to trigger the bonus and get the chance to pick from three doors to find a coin for the Big Deal slot machine! There are 2 silver coins which will give you 5 spins on three reels and one gold coin that will give you 5 spins on the five reels Big Deal Slot Machine. Now is your chance to Spin to Win!  The reels contain prize multipliers so watch for those.

Roger Free Spins – Roger the Host of the Game show is the free spins scatter trigger symbol and appears on reels 2, 4 and 5.  You’ll need to land a symbol on each of the three reels to earn free spins.

Reel or Deal Feature – The Reel or Deal feature is randomly triggered and can happen during any normal spin. During a spin, Roger may offer you a deal: Reels will be hidden and a win will be spun in. Do you want to take the hidden reels win or the cash prize offered by Roger?