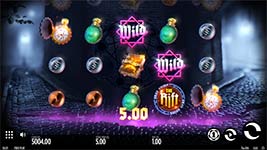 A mysterious rift has appeared in a murky back alley of a town, feeding on all the world’s magical artifacts. Can you collect them before they are sucked through?  Spin the reels and see if you are the chosen one that will save these cultural jewels in the 5-reel, 17-payline The Rift slot machine by Thunderkick!

It has been a while since Thunderkick has released a new game and maybe it’s because they were spending so much time perfecting this one. The game graphics are stunning.  The background looks like you are in an alley of Victorian era England but the crack in the cobblestone road brings an air of mystery to the game. As you spin the reels the symbols will disappear into the crack and on some bonus features, the mysterious purple haze will erupt from the crack and up the reels.  It’s a brilliant game with great sound, great illustrations, and the possibility for big wins!

Wilds -The Wild symbol is a pink intertwining of a square and diamond with the word WILD written across it. It will substitute for any other symbol, if and only if the wild symbol combined with at least one or more symbol it substitutes to form a winning payline.

Rift Spin – When a Rift Spin is triggered, any wild not appearing on a winning payline will become a sticky wild. In addition, 1-3 more sticky wilds will be placed randomly on the reels.

Sticky Wilds – Sticky Wilds occur on the Rift Spin feature and in the bonus game. They will lock into place and stay sticky for the rest of the bonus round or until they become part of a winning pay line.

Bonus Game – Each bonus symbol that appears on the reels activates 1 step on the Rift seal until the seal is completely filled. Every third step will grant 2 additional free spins and add 1 more sticky wild to every remaining spin of the bonus game.