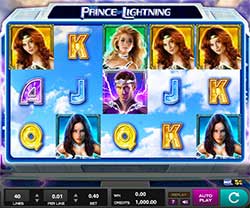 The Prince of Lightning Slot

The Prince of Lightning Slot

After an apocalyptic blast has left the world in darkness there is blind chaos. The world is left with a society with no law, no order. But one civilization has survived thanks to a man who has the supernatural ability to illuminate the city. The fate of this metropolis is left in the hands of The Prince of Lightning from IGT and High 5 Games.

This riveting game has 40-paylines across its 5-reels and is set against the bright blue sky on a cloudy day.  The symbols on the reels include the Prince of course, and he’s accompanied by three beautiful ladies. The game’s logo acts as the wild symbol and there is also a Free Games scatter symbol. Filling out the symbols are card symbols 10 through ace.

The Prince of Lightning Slot Features

Free Games Feature – Landing the Free Games symbol in all positions on reels 2, 3 and 4 will award you with 7 free games. The symbol is a scatter and only shows on the 2nd, 3rd and 4th reels.  During this round you can retrigger free spins in blocks of +7 up to a maximum of 98 free games in a row!

Capture Feature – During Free games, you’ll be able to capture one of the three female characters in the game. After each symbol capture, the credit value on the respective meter increases, up to 13x per meter. Meter values are 2 to 1000 credits times the total bet in the triggering game.

Super Stacks Feature – With the Super Stacks feature, the reels contain stacks of symbols that may transform into any of the symbols of the game. All stacked symbol positions on a reel transform to the same symbol.

Lightning Wilds – The Wild symbol in this game is the game’s logo and it will substitute for all symbols except the Free Games symbol to complete winning combinations when possible.