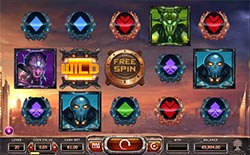 In the battle between good and evil, sometimes you need some superhuman help. Defeat the villains and earn rewards of up to 70,000 coins in the incredible new Super Heroes slot by Yggdrasil Gaming! The world as way we know it is threatened with utter destruction but luckily we have six different heroes to help us save humanity! Battle alongside Knox, Raven, Tesla, Mirage, Hopper and Trance in an epic battle.

Right from the game’s introduction video you know that you’re in for a ride.  The production value of this 20-line video slot is second to none and comes with some of the best graphics available. You’ll be battling for our planet’s survival with our Super Heroes who bring skills and strength to the battlefield.  The game features six different heroes each representing different features in the game like random wilds, mystery wins, extra free spins, wild reels, multipliers and changing symbols. There are tons of ways to win in this game and the Super Heroes will help you do it!

Wilds – The Wild symbol is inside some sort of neutron reactor and substitutes for all symbols except the free spin symbols to complete winning combinations.

Free Spins Mode – Each Free Spin activates the Superhero Feature. All Super Heroes start at level 1 and then level up each time they are summoned into action, up to level 4.

Raven Feature – Raven throws a rotating blade which turns up to 4 random reels into wild reels!

Tesla Feature – Tesla creates an impact wave which changes 2-5 random high and low paying symbols into other high and low symbols of one type to guarantee a win.

Trance Feature – Trance conjures up a time portal which awards up to 4 extra free spins. Trance is only summoned in Free Spin mode.

Knox Feature – Knox shoots a fire beam into the total win from the spin, multiplying it by up to 5 times!