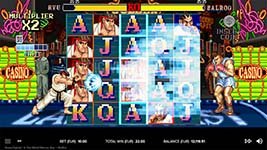 Round 1. Fight! NetEnt’s Street Fighter II: The World Warrior slot gives you the chance to revisit the iconic world of Street Fighter. Widely considered the first arcade fighting game, it was originally developed by Capcom in 1991.  This new slot release fuses the fast-paced arcade action with a 5×5 cluster pays slot game. There are a ton of features and gamification that make the game feel and play very similarly to the original version.

Choose one of 8 characters and fight a random opponent. If you win the battle, you are awarded Beat the Boss Free Spins. There are 4 boss levels in Free Spins. Each level offers a higher multiplier. Only by beating a boss can you move to the next level. Each victory increases your chances of winning big. Keep fighting off your opponents until you come up against the final boss himself… M. Bison!

Wild Gauge and Wild Combo Features – In the main game and in Beat the Boss Free Spins, your character has a Wild Gauge that is reset before each spin. The Wild Gauge is filled by one point for each high-value symbol in a winning combination. When there are no winning combinations on the reels and there are 7 or more points in the Wild Gauge, your character uses their unique Wild Combo feature that randomly places Wild symbols on the reels.

Colossal Symbols – Victory and Defeat symbols can appear on the reels as single symbols or 2×2 Colossal symbols counting as a cluster of 4 single symbols.

Insert Coin Gamble Feature – When you lose during the Beat The Boss Free Spins, you may get the chance to restart the current level by using the Insert Coin gamble feature and sacrifice a portion of your winnings.