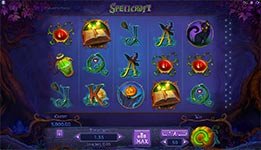 Three witches will put a spell on you, but it’s a good one! See what’s brewing in the cauldron for you in the 27-payline SpellCraft slot machine by Playson!  Watch the magic unfold with the Ghost Reel feature – an additional 6th reel which appears when you are granted the free spins feature. You can also win with an expanding wild and a Bonus Game where you’ll be exploring for riches in the laboratory of a magician. These three witches are ready to cast luck upon you!

This spooky game features three gorgeous and tempting witches.  Aside from those characters you’ll find a jack-o-lantern, spell book, potions, cauldron, voodoo doll and other symbols to form winning combinations. The music is enchanting and through it you can almost picture the witches dancing around a sacred spot in a forest together while casting a spell.  Maybe it’s a good spell, and maybe it means prizes for you.

Witch Wilds – The red-headed witch is the wild symbol.  She substitutes for all symbols except the scatter and bonus symbols to complete winning combinations. Additionally, this symbol will expand to fill the entire reel during the “Power of Three” feature.

Free Spins with the Ghost Reel – Land 3, 4 or 5 brunette witch scatters on the reels to win 9, 12 or 15 free spins. When you trigger this round, the five pre-existing reels will shift to the right to make room for a 6th and special Ghost reel that gives you more chances for wins.

Bonus Game – Land three or more blonde witches on the reels to trigger the bonus game. When starting a bonus game you get a guaranteed winning which depends on the number of appeared bonus symbols. The bonus game consists of 4 round and in each round you will get to choose one out of 5 objects.  You can win coins, collectable ingredients, hidden bonuses and multipliers.