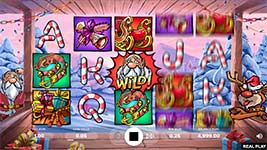 These two are usually the best of friends, but not in the Santa vs Rudolf slot by NetEnt! They’re at each other’s throats! Rudolf has only gone and nicked Santa’s hat right before he was due to fly out of the North Pole to deliver presents across the world. Now he needs your help to find his hat and get the holiday season back on track. It won’t be easy though! Rudolf is a crafty little reindeer, and he just won’t let up. Dive into this magical 20-line adventure and give it a spin.

Wild Symbol – Wild Symbols appear on reels 1 and 5 in the main game and all reels during Free Spins. Wild symbol substitutes for all symbols. Wilds that shift horizontally during Re-Spins are called Walking Wilds.

Santa’s Gifts Feature – In Santa’s Gifts there are 3 item sets where a player taps on 1 of 5 items to reveal their prize. The 5 items that a player chooses from in each set are: 3 coin wins of various amounts, 1 multiplier increase and 1 end of stage item. When a player picks a coin win it is added to their running coin total for the Santa’s Gifts. The player can have another pick from the remaining items in the current set.