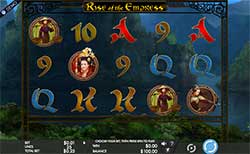 Rise of the Empress Slot

Rise of the Empress

Travel across the magical orient and battle for big winnings alongside the most feared warrior, in the new Rise of the Empress slot machine by Genesis Gaming! This gorgeous game takes  you on an epic 25-line adventure through the Asian mountains where features like the 5th reel re-spin and Royal Pick Feature can award you huge wins!

We’re starting 2017 off with a bang with this terrific new video slots release. The imagery in Rise of the Empress is completely immersive with a realistic landscape that moves as you play.  This only adds to the action of the slot which gets heated up with a plethora of rewarding features. The Dragon symbol is wild and the circling koi fish are the scatter symbol. There are also added wilds, a Royal Pick feature, mixed free spins and a 5th reel re-spin to add to your ways to win.

Dragon Wilds – The golden dragon symbol is the game’s wild and substitutes for all symbols except the scatters to complete wins. You can find this symbol on reels 2, 3, 4 and 5.

Koi Fish Scatters – Land three scatter symbols in any position on reels 1, 3 and 5 and you win a prize! The total scatter win is multiplied by the total wager. In addition, if you land scatters on all three reels in a single spin you will win 10 free spins. These spins can be re-triggered to give you even more spins.

5th Reel Re-Spin – Any 4 or 5 of a kind line win triggers the 5th reel re-spin feature. When triggered the first and fourth reels are held in place and the fifth reels is spun again. Each consecutive re-spin increase the win multiplier to a maximum of x5.

Royal Pick Feature – Landing a four of a kind “9, 10 or J” with the Bonus triggers the Royal Pick Feature. You get to pick from one of three chest to reveal your prize which will be between 1 and 10x your total wager.

Added Wild Feature – Landing four of a kind “Q, K or A” with the bonus triggers the Added Wild Feature. Randomly  2 reels will have all symbols replaced with Wilds, then all lines are re-evaluated and paid. Only reels 2, 3, 4 and 5 can be changed into Wilds.

Mixed Free Spins – Four of a kind “Empress, Warrior, Student or Peasant” with the bonus triggers the Mixed Free Spins feature where you win 10 free spins. During each Mixed free spin those four symbols pay as mixed symbols.