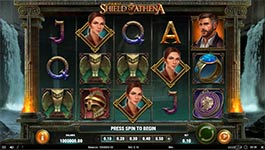 Rich Wilde and the Shield of Athena

Rich Wilde and the Shield of Athena

The remarkable Rich Wilde is back, and this time he’s brought someone else along for the ride! Join Rich and his daughter Cat Wilde in Rich Wilde and the Shield of Athena slot from Play’n GO. This 10-line adventure sees Rich, and Cat, travel to Atlantis in search of the legendary Shield of Athena, which bears the head of the gorgon Medusa.

Rich Wilde is the game’s Wilde in this game, and Cat acts as the Scatter. While Rich will stand in for any symbol (except Cat), to create winning combinations along the game’s paylines, Cat will help you trigger one of the game’s special features, Medusa’s Gaze. The game’s symbols are all taken from within Greek mythology; the Helm of Athena, the Ring of Wisdom, the Pendant of Courage, the Golden Owl (a symbol of Athena herself), along with the Shield of Athena. The Shield of Athena will also transform into a fearsome Wild during Re-Spins feature!

Wilde Re-spins – Wilde Re-Spins can randomly be activated on any standard game spin and, once activated, if the Shield lands on the reels you will be granted a Wilde Re-Spin. Your Shield now becomes a Wild and, any Wilds or any winning lines on the grid will be locked in, and the rest of the reel positions will re-spin. If any more Shields or winning combinations are created during the re-spin, they will also be locked in, and the remaining positions will spin again.

You will continue to be awarded re-spins until no more Shields or winning combinations land on the reels, and then all your locked symbols will pay out!

If you land 3, 4 or 5 Scatters again at any time during Medusa’s Gaze you’ll be awarded another 10, 12 or 15 spins, with the possibility of unlimited free spins!