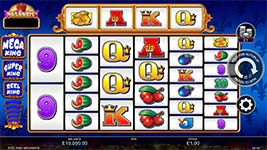 Get crowned the big winner in the exciting Reel King Megaways online slot from Inspired Gaming.  This 6-reel has up to 5 symbols per reel and a massive 117,649 Megaways to win, using Big Time Gaming’s Megaways mechanic.  Wins can really start to pile up when you land wild symbols to complete wins and keep them rolling with the Cascading wins feature. Landing 6 yellow reels in a spin will trigger the Reel King feature which is your ticket to massive jackpot prizes!

Wild Symbol – The wild symbol substitutes for all symbols in the game. It appears on the extra reel in the base game and in free spins bonus.

Megaways – All games are played with up to 117,649 ways to win. Only the highest award is paid per winning combination. Wins on different winning combinations are added. The Extra Reel adds an extra symbol to reels 2, 3, 4 and 5.

Cascades – During the base game and Reel King Free Spins every winning symbol is part of a cascade. Cascade symbols are replaced by new symbols coming from above the reels and from the right on the Extra Reel.

Lit Reels – ‘Dings’ – During the base game between 0 and 6 reels will light yellow with a ‘DING!’ sound upon landing. Dings occur from left to right consecutively, starting with the leftmost reel. One extra reel is lit yellow for each subsequent Cascade. Achieving 6 yellow reels triggers the Reel King feature. One further cascade advances you to the Super King Feature.

Reel King Feature – Between 1 and 6 Reel Kings will appear over the reels. The player begins on the leftmost position on the Free Spins trail. Each King will spin his reels, with multiple prizes available.

Free Spins Trail – If all three reels of an individual Reel King become lit when landing, the player advances one position along the trail. When a Reel King spins to a losing combination and has less than 3 lit reels, he disappears. The feature ends when there are no Kings left on the reels.

Reel King Free Spins – The number of free spins remaining and current multiplier value is displayed on the right of the screen. Each winning cascade increases the unlimited multiplier by 1.