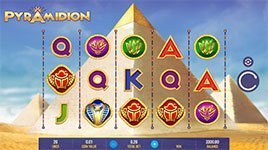 The pyramid calls on mysterious powers to offer valuable rewards in Pyramidion slot machine by IGT!  Travel to the lands of ancient Egypt and discover the treasures of pharaohs across 5 reels, 3 rows and 20 pay lines. The glittering, golden Pyramidion acts as a conduit for mysterious powers that can influence and change the fate of the reels; two or more Pyramidion scatter symbols appearing anywhere on the reels reveal a mystery modifier. Trigger two exciting free spins bonuses to explore the hidden treasures inside the tombs of the pyramid!

Free Re-Spin Modifier Feature – Free re-spin modifiers are triggered when two or more Pyramidion Scatter symbols appear anywhere on the reels during the base game. Once of four re-spin modifiers is awarded from: Sunbeam Wilds, Waterfall Stacks, Obelisk Wilds, or Mighty Reel.

Tomb of Mystery Free Spins Bonus – The Tomb of Mystery Free Spins Bonus is triggered when two bonus symbols appear in any position on reels 1 and 3, combined with one Bonus Tomb of Mystery symbol in any position on reel 5. When triggered, a wild reel containing a 2x multiplier appears on reel 5. After each free spin, a mini-reel above the reels spins. The wild reel either holds on the current reel with the multiplier value increasing by 1, or moves to the next reel to the left, keeping the same multiplier value for the next spin.