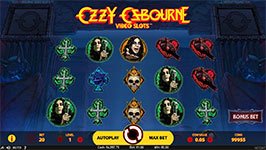 Bite the head off big wins with the Prince of Darkness in the 5-reel, 20-line Ozzy Osbourne slot machine from NetEnt! This new game builds on the success of the NetEnt Rocks portfolio which already includes slot titles including Jimi Hendrix, Guns N’ Roses, and Motörhead. This entertaining game offers Re-Spins and Free Spins with the action-packed Symbol Charge Up. Before Re-Spins and each Free Spin, the Symbol Charge Up is activated and awards one or several features: Coin Win, Wild symbols, Multipliers or symbol Upgrade. Just like with Ozzy, you never know what you’re going to get.

Wild Symbol – The Bat Head is the wild symbol and can appear anywhere on the reels in the main game, Re-Spin and Free Spins and substitute for all symbols except for Scatter symbols.