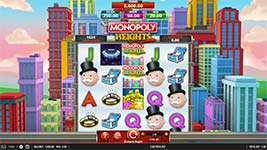 Bring your gaming to new levels of excitement as you become the world’s next real estate tycoon in Monopoly Heights slot from Bally! The popular board game has expanded its slot machine empire with this new addition which introduces expanding reels, jackpot bonus, and re-spins to your game play. In fact, the expanding reels feature can give you up to 32,768 ways to win across the game’s 5 reels. Wins can reach up to a massive 2500x your bet per spin!

Wild Symbol – The Dice symbol is wild and substitutes for all symbols except the scatters.  Wilds can appear on reels 2,3, 4 and 5 to complete possible wins.

Hotel Scatters – The Hotel symbol is the game’s scatter. Land at least 1 hotel symbol for a chance to win jackpots! Hotels appear on reels 1 and 5 only in the base game.

Expanding Reels Feature – Any Mr. Monopoly winning combination triggers the Expanding Reels Feature. The game has 1024 ways as its standard but with expanding reels you can get up to 32,768 ways to win. All symbols on the screen will lock into place and remain locked for the duration of the feature. Once new row will then be added to the top of the reel set while increasing the number of ways. The new row will spin. If any new Mr. Monopoly symbols land to create new winning combination or improve existing winning combinations, this row of symbols will lock into place an a new row will be added to the top of the reel set.

Jackpot Feature – Land Hotel on both reel 1 and 5 to trigger the Jackpot feature. Landing Hotel on either reel 1 or 5 may randomly trigger the Jackpot Feature. During this feature, a pick field is displayed with 32 Bonus Cards to pick from. Picks reveal four different sized jackpot prizes and fill 1 space below the corresponding jackpot meter. Picks are made until all spaces are filled for 1 jackpot according to the the pay table.  The top Grand prize for filling 8 spaces is a whopping 2500x your total bet!