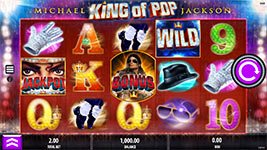 Moonwalk into winnings and relive the magic of the King of Pop in the incredible 5-reel, 25-payline Michael Jackson: King of Pop slot machine online by Bally Interactive! We’re huge fans of Michael here at Slotorama and having played this game in land-based casinos, we’re thrilled that it’s finally available to you here on the website.

What could be better than spinning the reels of the games you love while having the king singing to you through your speakers?  We can’t think of much and that’s just what happens in this game.  The charismatic Michael Jackson who was famous for hits like Billy Jean, Thriller, and Don’t Stop til You Get Enough comes alive again in this game. In fact, you’ll be listening to four of his famous tracks in the game! While enjoying the sounds of his music, you’ll be trying to make combinations from symbols like a Diamond Wild, Michael’s diamond studded glove, his trademark hat, sunglasses, dancing shoes, as well as traditional card symbols of nine through ace.  You’ll also find two scatter symbols that both depict the King as well as Moonwalk Wilds, Stacked Wilds, Wheel Bonuses, Beat it Free Games and Smooth Criminal Free Games!

Stacked Wilds – During any base game spin, there is a chance 2 reels will become completely wild. Wilds substitute for all symbols except the Bonus and Jackpot. If a bonus or Jackpot symbol would land in a space where a wild appears, it counts as both a wild symbol and that symbol.

Wheel Bonus – Bonus symbol appearing on or within 1 position of centre line on reels 2, 3 and 4 initiates the Wheel Bonus. One spin of the wheel is awarded and you can win free games, credits, or credits with an additional spin of the multiplier wheel!

Beat It Free Games – When you trigger the Beat It round you’ll be awarded 10 free games. During free games, any wild that appears on the reels remains for the remainder of the free games. Bonus and Jackpot are not available during the Beat it Free Games. Wilds may appear on reels 2, 3, 4 and 5.