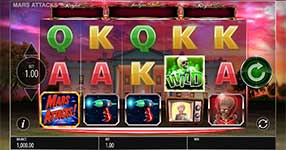 The martians are coming, the martians are coming! Get ready for an alien adventure across 20-reels from Blueprint Gaming based on the hit 1996 film Mars Attacks! Fans of famed producer Tim Burton and slots lovers alike will fall head over heels for this fantastic new game. Watch as bonus features invade the reels and award you with rewards that include 1 of 5 Mars Attacks! modifiers.

Wild Symbol – The wild symbol substitutes for all symbols in the game except the scatter bonus, to complete wins when possible.

Mars Attacks! Bonus – Land three or more bonus symbols to earn one of five bonus features. Move up the meter to win one of these bonuses which include Final Stand, Martian TakeOver, We Come in Peace, Spy Hunter, and D.N.A. Analysis.

Game Modifiers – At any time during any spin, you could trigger a randomly awarded game modifier!  These special features include the Sub-Zero Lazer, Mega Shrink Ray, Expansion Cannon, Radiation Blaster, and Abduction Beam.

Jackpot King Feature – Randomly activated during any spin, you could win the Jackpot. Spin the reels to collect crowns. The more crowns you collect, the bigger the total bet multiplier awarded. Pick from the Kings Treasure to increase your prize. Enter the “Wheel King” for huge wins and a chance to win a progressive pot!