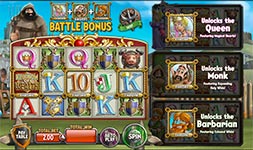 Take a magical medieval journey to the Kingdom of Wealth in this 30-payline slot machine online from Blueprint Gaming. With a few spins on the medieval reels of this game you could see yourself joining the elite monarchy of the middle ages with riches behind your wildest imagination. Unlock reels, engage in an epic battle bonus and even become the King of the Kingdom of Wealth!

This exciting game will take you back on a fun journey through the middle ages. There is a high interactive nature to this game as not only are you simply spinning the reels to win cash, but you’re also trying to work your up the medieval hierarchy.  As you move up through the ranks, different level features and bonuses will be unlocked to give you more wins. Eventually you will make it to the level of King and you get to enjoy all of the spoils that come along with that title!

Unlock Reels – Unlock additional reels during game play by landing a character on the throne. Have all three characters on the throne on the same spin to trigger the Battle Bonus!

Queens Magical Hearts – Land the Queen in the throne on reel 1 to unlock the Queen reel. A random number of magical hearts are added to the reel where they will land and reveal a mystery prize.

Monks Expanding Wilds – If the monk lands in the throne on reel 3 it unlocks the Monk Reel. A random number of holy wilds are added to the reel where any monk that lands in view expands to fill the entire reel with wilds!

Barbarians Colossal Wilds – If the Barbarian lands in the throne on reel 5 it will unlock the Barbarian Reel. A random number of colossal Barbarian Wilds are added to the reels and any Barbarians that land act as colossal wilds.