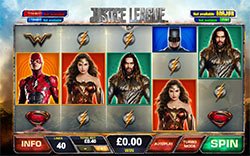 Get ready for the new action-packed Justice League slot machine by Playtech! Launched in tandem with the new Hollywood Blockbuster film, you can join Superman, Batman, Wonderman and the other heroes in a big slots adventure. Playtech and Warner Bros. have teamed up for this exclusive DC-branded film and TV content deal that sees the gaming giant launch this incredible new 40-line video slot with four progressive jackpots available!

Fueled by his restored faith in humanity and inspired by Superman’s selfless act, Bruce Wayne enlists newfound ally Diana Prince to face an even greater threat. Together, Batman and Wonder Woman work quickly to recruit a team to stand against this newly awakened enemy. Batman, Superman, Wonder Woman, Aqua-man, Cyborg and the Flash are ready to save the planet from an assault of catastrophic proportions. Are you?

Justice League Wilds – The game’s logo is the wild symbol and substitutes for all symbols except the scatter to complete wins.

Super Hero Re-Spin – Any spin can trigger a Super Hero Spin. The feature frame turns the Super Hero symbols wild! Re-triggers can occur up to five times to turn all heroes wild.

Free Games Feature – Land three scatter symbols anywhere on reels 1, 3 and 5 to trigger the free games bonus. You will get to choose which of the six super hero free spins rounds to play with each character having their own power.