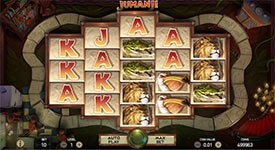 A brand new Jumanji adventure awaits in the exciting Jumanji branded slot machine from NetEnt! Based on the hit films (original in 1995 and another in 2017) this game adds yet another dimension to the immersive game series. Presented on a 3-4-5-4-3 game grid, the slot has 5 reels and 36-betlines that offer a 96.33% RTP. Get ready for a larger than life adventure and the potential for monstrous wins in Jumanji!

Sticky Vines – If there are wins on at least 2 bet lines and on at most 9 in total, and the other features have not been activated, then it is possible for the Sticky Vines to be activated. If the Sticky Vines feature is activated, re-spins are awarded which increase the win. During Sticky Vines, all symbols that are a part of a win and all Wilds from the initial spin stick to the reels, and all other symbols spin again.

Monsoon Wilds – If the Monsoon Wilds feature is randomly activated in the main game, one or two reels will be completely covered in wilds while the reels spin. Once the reels have stopped, any wins are evaluated and awarded.

Monkey Mayhem – If the Monkey Mayhem features is randomly activated in the main game, any potential wins are awarded once the reels have stopped. Then, all symbols are shuffled randomly to created a guaranteed win, which is then evaluated and awarded according to the Paytable.

Wild Stampede – If the Wild Stampede feature is activated, rhinos will stampede across the screen while the reels spin, adding 4-9 wilds to the reels. Once the reels have stopped, any wins are evaluated and awarded according to the Paytable.

Board Game Bonus – Land three or more scatters anywhere on the reels in the main game to activate the Board Game bonus.  Move your tokens on the board by rolling the two six-sided dice. You may win a variety of features and prizes in this round including Vines Free Spins, Monsoon Free Spins, Monkey Free Spins, Stampede Free Spins, Mystery Feature, Coin Wins or Extra Rolls.