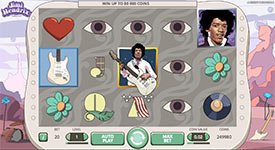 One of the most legendary American rock guitarists is here with his own new slot machine in the 20-payline Jimi Hendrix slot machine from NetEnt! In just January the same game developer released Guns N’ Roses slot machine to us and that game is phenomenal. This one is no slouch either.  It’s packed with great game features, an authentic Hendrix game soundtrack, and game graphics that are simple throwback to the flower power era that he rose to prominence through.

As the purple haze fades, it’s time to rock out with this new slot machine where you can win up to 80,000 coins and win with features like a Pick and Click game with 3 different free spins and coin win. You can hear Jimi’s tunes blasting while you spin the reels, song like Foxy Lady and Voodoo Child. On the reels you’ll find symbols like Jimi himself, a peace sign, a heart, flower, an eye, a guitar and more to help you create winning combinations.  It’s the features that you want to try to hit though and there are many of them!

Jimi Wilds – The Jimi Hendrix head shot symbol is the wild and substitutes for all symbols in the game except the Scatter symbols to complete winning combinations when possible.

Coin Win – If you collect three coin win symbols, a coin win is awarded with a random multiplier of between 8x and 30x your initial bet!

Little Wing Free Spins – Collect three Little Win free spins symbols and win between 6 and 12 free spins with between 3 and 5 overlay wilds appearing randomly on the reels for each spin.
Choose your bet size and number of line to play and then Spin to Win!