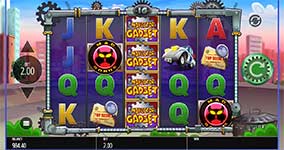 You may remember a tv show from the 1980’s that featured a bumbling bionic police inspector who stumbles about on his cases, while his niece Penny and dog Brain secretly do the real investigative work. This comical character is full of surprises, just like the new Inspector Gadget slot machine by Blueprint Gaming! This terrific new slot blends the humorous antics of the detective with a chance at big wins with a ton of bonus features. Spread across 5-reels and 20-paylines, watch for Colossal Symbols, Penny Stacked Wilds, Go Go Gadget Expanding Reels and much more!

Wild Symbol – The bomb is the game’s normal Wild symbol and substitutes for all symbols in the game except the bonus symbols.

Safe Heist Bonus – Choose from the selection of safes where you’ll find cash prizes locked inside. You can land the other 4 features from this round too.

Dr Claw’s M.A.D. Agent Bonus – Triggered by landing on the Dr Claw’s M.A.D Agent Bonus segment of the wheel during the Bonus.  After a short transition, a scene will be shown with a number of M.A.D items on a computer screen along with a winplan to the left. You get to select the M.A.D items to reveal an agent. Each agent will match up to a total bet multiplier, which is paid for matching 3 of the same item. Additionally, revealing a special M.A.D Cat will upgrade the total bet multipliers, and collecting 3 M.A.D symbols shall award the M.A.D Money Bonus. Watch out for the golden spacebar which is active if M.A.D Money is guaranteed. Simply pressing it will take you straight into M.A.D Money rather than revealing it.

Every Penny Counts Free Spins – These free spins are triggered by landing on the Every Penny Counts Free Spins segment of the wheel during the Bonus. A screen transition will occur and the player will be taken to a new destination, the top of the M.A.D Headquarters with multiple reels below. The screen will start at the top, before the screen pans down the other reel sets, which display the reels with fixed wilds in position. You are then presented with the bottom level. Gadget can then appear to take the player on a journey up M.A.D Headquarters and stop at random locations with fixed wilds in position. Free Spins continue until all spins are used where the player is awarded the amount displayed in Bonus Winnings.

M.A.D. Dash Free Spins – These free spins are triggered by landing on the M.A.D Dash Free Spins segment of the wheel during the Bonus.  M.A.D Dash Free Spins are played out on a 5×4 reel format with a fixed amount of Free Spins. Positioned above the reels shall be a bonus grid containing various enhancements such as cash prizes, extra free spins and extra wilds. After each free spin any special overlay symbols (Car) that land on the reels will award a drive in the Gadget Car in the bonus trail. The Gadget Car will drive around the trail until it stops and awards the corresponding prize. The feature ends when no free spins remain. Additional Free Spins can be awarded during Free Spins. M.A.D Money will play out afterwards, if the Bonus is triggered.

M.A.D. Money Bonus – Collecting 5 Bonus symbols, gambling to, or having landed on the M.A.D Money Bonus on the Bonus Wheel triggers the Big Money Bonus. Here you will be presented with numerous different amounts in bombs where the bombs will spin around Dr Claw. Keep picking from M.A.D icons to spin the bombs and collect big money prizes until COLLECT is revealed. The size of the prize is determined by the colour of the bomb, bronze being small, silver being medium and gold being large.

Go Go Gadget Spin – On any spin a phone call can occur on the reels. If Gadget answers the phone to either Penny, Brain or Quimby one of the following modifiers are awarded:

Mission Gadget Wilds – Whilst the reels spin Gadget will appear to create wilds on the reels through multiple Gadget animations. Watch out for Go Go Gadget reels which can expand up to 7 symbols high activating up to 50 winlines.

Mission Mystery Brain – Whilst the reels spin Mystery Brain symbols are added to the reels. When the reels stop any in view will transform into any other symbol (expect Bonus). Watch out for Go Go Gadget reels which can expand the reels and activate additional winlines.

Mission Colossal Symbols – Whilst the reels spin a shutter will come down to cover the reels. When revealed a colossal symbol will be revealed which can land in reels 1, 2 and 3 or reels 2, 3 and 4. Watch out for Go Go Gadget reels which can expand the reels and activate additional winlines.

Mission M.A.D. Added – Whilst the reels spin M.A.D Bonus symbols are added to the reels. This will activate an anticipation spin and if 3 or more Bonus symbols land in view the Bonus is awarded.