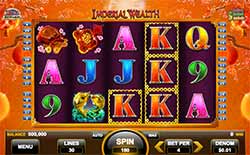 Live like an emperor with a little bit of luck on the reels when you spin to win on Imperial Wealth slot by Konami! This gorgeous game gives you 5-reels and 30-lines of action with stacked wilds, free games and the Lucky Frame Feature. Become emperor for a day and claim your fortunes!

In 221 BC Qin Shi Huang united the various warring kingdoms and created for himself the title of “emperor” (huangdi) of the Qin dynasty, marking the beginning of imperial China. With that came immense wealth and that can all be yours with a few lucky spins!  Konami has created a fantastic game that can award you with all of the riches of emperors past. Set on a fiery orange background you’ll be making winning combinations from a variety of Chinese-related symbols, least of which is the stacked dragon wilds!

Stacked Dragon Wilds – The Dragon symbol is the game’s wild and can substitute for all symbols in the game except for the scatter. It also comes stacked on the reels to help create even more combinations!

Lucky Frame Feature – There is an empty box symbol that can appear in any position on the reels.  If you get three or more in a spin you will trigger the Lucky Frame Feature! All symbols that appear in this framed box will be replaced with a random matching symbol to award surprise winnings.

Free Games Feature – The free games feature can only be triggered during the Lucky Frame Feature. Land 3, 4 or 5 Chinese banner symbols anywhere on the reels to win 8, 18 or 88 free games respectively. During this round, a reel is randomly chosen to have all positions on that reel replaced with the symbol with the frame.

Action Stacked Symbols – Each reel contains a number of adjacent positions that are randomly replaced with one of the game’s symbols before the reel spin is initiated.  All replacement positions are then filled with the same symbol!