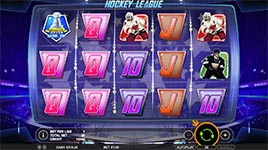 Fire in your heart and ice in your veins! Join the Hockey League, a 5-reel, 20-payline video slot from Pragmatic Play! A few spins on this slot machine could see you become the MVP when you trigger the Free Spins round.

The slots reels are set within what looks to be a television screen however you can see that you are sitting in a private box at the live hockey game.  On the reels you’ll find symbols that look like real NHL teams and players. There is a player that looks like Sidney Crosby from the Pittsburgh Penguins, captain Shane Doan of the Phoenix Coyotes and goalie Robin Lehner from the Buffalo Sabres. A Referee is also on the reels as the game’s high paying regular symbol, while the League Cup acts as the Wild and a Hockey Puck is the game’s Scatter.  Filling out the symbols are traditional card symbols 10 through Ace.

League Cup Wilds – The League Cup symbol is the wild in this game and will substitute for all other symbols in the game to complete winning combinations when possible.

Hockey Puck Scatters – The Hockey Puck scatter symbol is both a scatter and a wild.  If you land three or more of these symbols anywhere on the reels you will trigger the Most Valuable Player round in which you can win up to 10 free spins! Before the round starts, a random symbol is chosen out of the character symbols. The chosen symbol will act like a scatter symbol during the next free spins round. You can win with it anywhere on the reels and it pays according to the symbol’s paytable.

Gamble Feature – After any win you can choose to gamble your winnings with the chance to double up.  Choose whether you think the next card is red or black and if you choose correctly, you’ll double your original win.

<< Valley of the Scarab
Sugar Rush >>