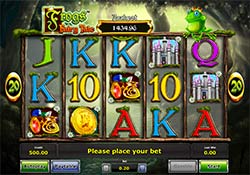 One kiss from the Frog Prince is all you need to change your fortunes forever! Have your chance to live the life of royalty in Frog’s Fairy Tale slot by Novomatic!  This fun game has 20 pay lines of action across its 5-reels and offers features like wilds, a Frog Bonus, Golden Ball bonus, free spins and much more!

Novomatic has really nailed this slot with the combination of humour, graphics and game play.  The sounds are comical with a fun soundtrack and the occasional frog burp after a hefty meal of flies. On the reels you’ll make winning combinations from symbols that include the Frog Prince, a Lily Pad, a Crown, Jewellery, a gold coin, a castle and card symbols 10 through ace.  Where this game really excels is its features which take your winning opportunity to another level!

Wilds – The Frog Prince is the wild symbol in the game and substitutes for all symbols except the lily pad bonus scatter.

Enchanted Stream Bonus – Press the leaf to reveal either a number of moves along the Enchanted Stream, a love heart that increases prizes available, a frog which will boost you forward, or collect which will end the bonus and pay the value currently highlighted. Reach the end of the stream to be awarded the Golden Ball Bonus.

Golden Ball Bonus – 5 Golden Balls with multipliers on them will fall into the pond. Choose an area of the pond to reveal a golden ball and your prize.

Colossal Spin Bonus – Spin the reels with symbols on reels 1, 2 and 3 replaced with Colossal Reel symbols, which are equal to nine regular symbols. The bonus uses the same win lines as the regular spins so you are guaranteed a win on all 20 win lines.

Princess Prize Bonus  – The Princess will blow some kisses and award some prizes. With each kiss, the prize goes up.