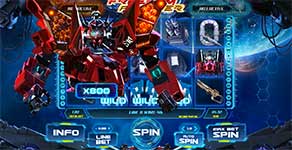 If you’re a fan of the Transformers Movie, there is a good chance that you’re going to fall in love with the new Freedom Fighters slot machine here at Slotorama. Enormous robots from another galaxy have come to earth in a bid to save humans from extraterrestrials hoards that threaten their extinction. You have the help of the Freedom Fighting robots and your own fighting skills on the slot reels to fight back against the evil creatures and if you do, you’ll earn some big rewards!

The first thing to say about this game is the graphics are outstanding.  As such there is sometimes a wait time for the game to load but if you can bear through it, we promise it’ll be worth it.  You are sitting inside a space craft, staring out at world’s just in front while the slot reels are on your spacecraft’s screen.  On the reels you’ll find two freedom fighting robots who when hit jump off the reels with incredible animations.  There are also other symbols like guns, bombs, radar, 10, Queen, Ace and more. Hitting one of the bonus rounds in this game will make you feel like you’re sitting in the movie theatre watching a movie, they’re that good! … and not to mention pay out pretty big too.

Spacecarft Wilds – The blue spacecraft symbol with “Wild” written across it is the wild and will substitute for all symbols except the scatter and two bonus round symbols.

Colony Attack Bonus – Land three or more space ship bonus symbols to trigger the Colony Attack bonus round. There are three missions in this game including: Clear the area of enemy forces; win the battle and destroy the enemy defending line; and the final mission of Find and destroy the colony’s main fleet!

Hall of Weapons Scatter – Land three or more green gun scatter symbols on the reels to trigger the Hall of Weapons feature. Here you’ll win 8 free games but what happens in those games will depend on the weapon you choose, and you’ll have 5 to choose from. Extra bonuses include additional wilds, frozen expanding symbols, stacked symbols, random expanding symbols or triple free games.