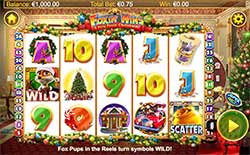 Get ready for the ultimate in festive cheer with everyone’s favourite fox in Foxin’ Wins A Very Foxin’ Christmas slot machine by NextGen Gaming! This fun game offers you 5-reels and 25-lines of slots action inside the well-appointed and decorated home of the Fox.  He has a lot of gifts under the tree with your name on them too! Start spinning the reels to unwrap your present and take them home with wilds, free games and random bonus!

Foxin’ is a lovable and mischievous character created by NextGen and has featured in many of their games. This time you are brought into his luxuriously decorated home for the holidays! And what would the holidays be without gifts, of which there are many. Keep an eye out for bonus features like Wilds, Free Games and the Random Bonuses. You can also activate the SuperBet feature to increase your chance at hitting bigger wins.

Foxin’ Wilds – Foxin is on the reels as the game’s wild. He is looking regal in his Santa’s hat so you’ll know him when he lands on the reels.  He can substitute for all symbols except the scatter to complete wins.

Free Games Feature – Land three or more Pots of gold coins anywhere on the reels to earn 10 free games! During the free game, fox pups appear more frequently and all prizes are doubled. You can also re-trigger the free games during the round to keep the wins rolling.

Random Bonus – The Random Bonus can be awarded after any paid spin. Keep a lookout for either Fox Funds or Leprechaun Shakedown and win the prizes shown.