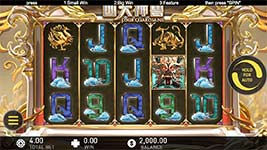 Travel to ancient China in the brand new Four Guardians slot from Gameplay Interactive. Catch a glimpse of one of the four mythological creatures in the Chinese constellations to be awarded with big prizes.  This 5-reel game has 20-lines of action and features four different and rewarding wilds that resemble each of the myths guardian animals!

The famous four mythological creatures from the legend are the Azure Dragon of the East, Vermillion Bird of the South, White Tiger of the West and Black Turtle from the North.  Each of these individuals represents a direction and a season and symbolically, and as part of spiritual and religious belief, are culturally important in China, Korea, Vietnam and Japan. Now back to the slot game.  Where this game really excels is its interpretation of each of the four creatures and by giving each its own wild feature!  There are four different wilds that can hit, and when the do they hit big!

4 Different Wild Features – The golden symbol with green “Wild” written across it is the wild and will substitute for all symbols to form wins. Each can expand in a different wild pattern .  The Wild-X Dragon guardian symbol only expands on the center row for example. When it appears on rows 1 or 3, it does not expand and behaves as a normal wild symbol. The Wild Square Turtle will expand to create a wild box on reels 2, 3 and 4. The Wild Horizontal Tiger will expand from its current position to include one symbol to both its left and right. Finally, the Wild Vertical Phoenix will expand vertically on the reel on which it lands to fill the reel!