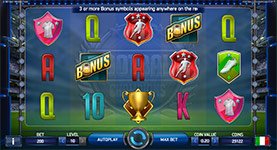 Are you a football fan, a passionate fan that is excited to watch matches like the UEFA Europa League final between Liverpool and Sevilla, or the Champions League final between Real and Atletico Madrid? Well now you can participate in all of the hot action with NetEnt‘s brand new Football Champions Cup slot machine online at Slotorama! This video slot has 5-reels and 20-paylines with a huge assortment of winning features to give you a real chance at bringing home the gold!

Hear the roar of the crowd as your country’s club team battles in the tournament to bring home the Football Champions Cup.  This beautiful game puts you in the heat of action right at game time but before you start, you get to pick your favourite team by selecting its flag in the bottom right corner of the game. Symbols in the game include all sorts of team crests depicting players, kits, boots, gloves, a whistle, a trophy, a bonus symbol, soccer ball wilds, and card symbols 10 through ace.

Penalty Shootout Bonus Game – Land three or more Bonus symbols on the reels to trigger the bonus game. The bonus game is a pick and click penalty shootout game that initially consists of 5 rounds. Each round, in turn, consists of two parts. In the first part you pick one of the four positions on the screen to try and score. In the second part, you act as goalkeeper and pick one of four positions to try and save the opponent’s shot.

Free Spins – The free spins trigger is the Champions Cup trophy symbol and landing three of them anywhere on the reels will trigger free spins. The Free Spins Tournament imitates the knockout stage in the football Championship. The maximum number of Free Spin rounds is 4, since you advance from the Round of 16 to the Quarterfinal, then to the Semifinal and the Final. The goal is to win the Final and receive an extra coin prize.

Normal Wilds – The Soccer ball symbol with golden Wild written across it is the wild symbol and substitutes for all other symbol except the Scatter and Bonus Symbols to complete winning combinations when possible. The blue and red soccer ball wilds appear only in free spins and trigger goals for your and the opponent’s team, depending on the reel they land. Blues land on reels 1 and 2 while reds land on reels 4 and 5.